At the Institute for Tropical Ecology and Conservation (ITEC) we occasionally take our students into Bocas Town on a Friday or Saturday afternoon.  While there, every now and then a student will notice that buildings everywhere are along the water’s edge and will wonder out loud if the area might be susceptible to obliteration by a hurricane.

It’s a more interesting question than you might think.  What makes it interesting is a certain Hurricane Martha. 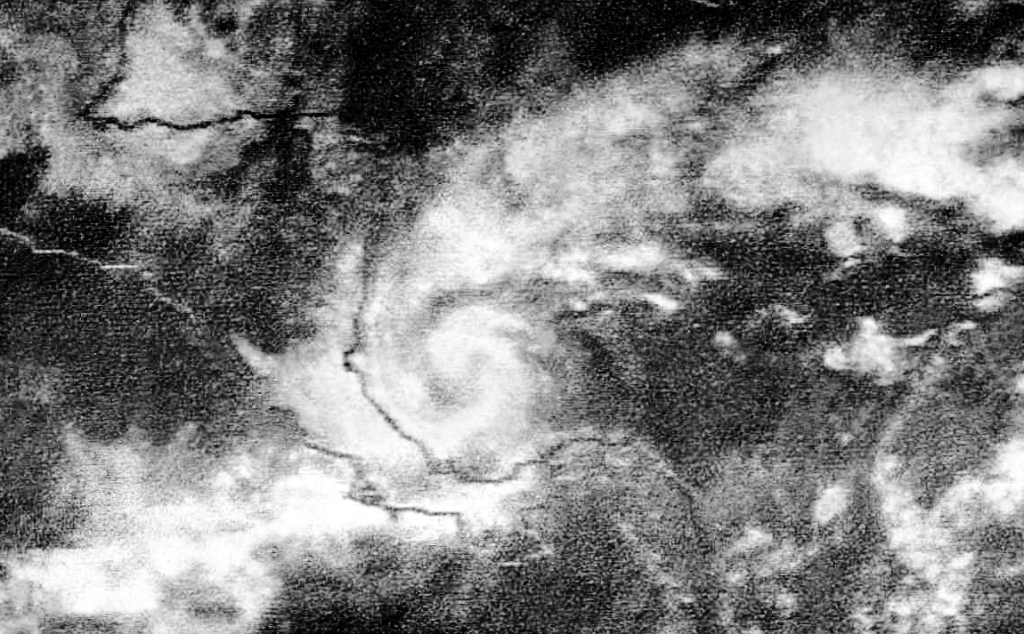 On the 21st of November 1969, tropical storm Martha formed off the coast of Panama about 100 miles northeast of Bocas Town.  It briefly attained hurricane status over water on November 24. Subsequently, it weakened, drifted south, and on the 26th made landfall as a strong tropical storm in Veraguas Province to the east of Bocas Town.  While Martha didn’t pass over Bocas Town, there was significant flooding there along with major damage to crops elsewhere on the island of Isla Colon.

So the answer to the student’s question is “yes” but it’s a very qualified yes.  Why?  It’s because Martha is the only known tropical cyclone to ever make landfall in Panama.  Also, that Martha is so exceptional is not particularly surprising for reasons that can be seen in the photograph below showing tropical cyclone tracks observed between 1985 and 2005. First, most tropical cyclones in Panama’s part of the world trend northwest and not south like Martha did. Second, Panama is probably protected to some degree from westward drifting storms by northern South America. Finally, Martha formed at about 10°N latitude. As can be seen below, this is about as far south as tropical cyclones form in the North Atlantic Basin: 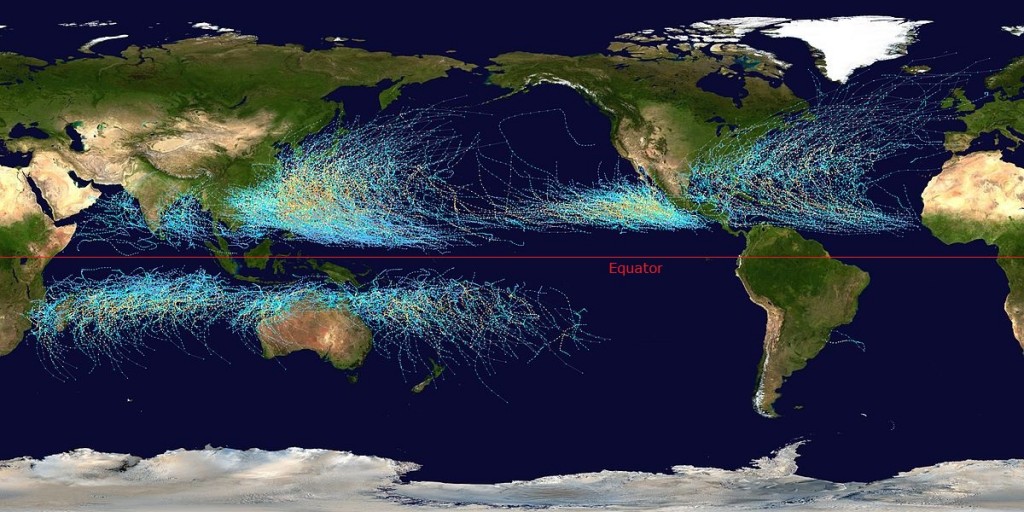 This raises the question as to why there’s some southern limit for hurricane formation in the North Atlantic Basin.  It’s a question that we can begin to answer by looking further at the above photograph.  If you do this, you’ll notice that while the exact latitudinal limits vary from ocean basin to ocean basin, there’s always a region around the equator where tropical cyclones don’t occur. The reason for this lies in the fact  that the Coriolis effect is important in initiating and maintaining the “spin” that’s one hallmark of tropical cyclones. This effect declines with decreasing latitude until it is zero at the equator.  Consequently, air rushing into a group of storms near the equator doesn’t turn sufficiently to impart the spin necessary for tropical cyclone development.  Presently, only 20 tropical cyclones have been recorded between 5°N and 5°S latitudes world-wide and almost no cyclones have been recorded in the region between 180 miles north and 180 miles south of the equator.

The key word in this last observation is almost. In an event thought impossible by some meteorologists, in December of 2001 Typhoon Vamei formed a mere 100 miles from the equator in the South China Sea between Borneo and Malaysia. 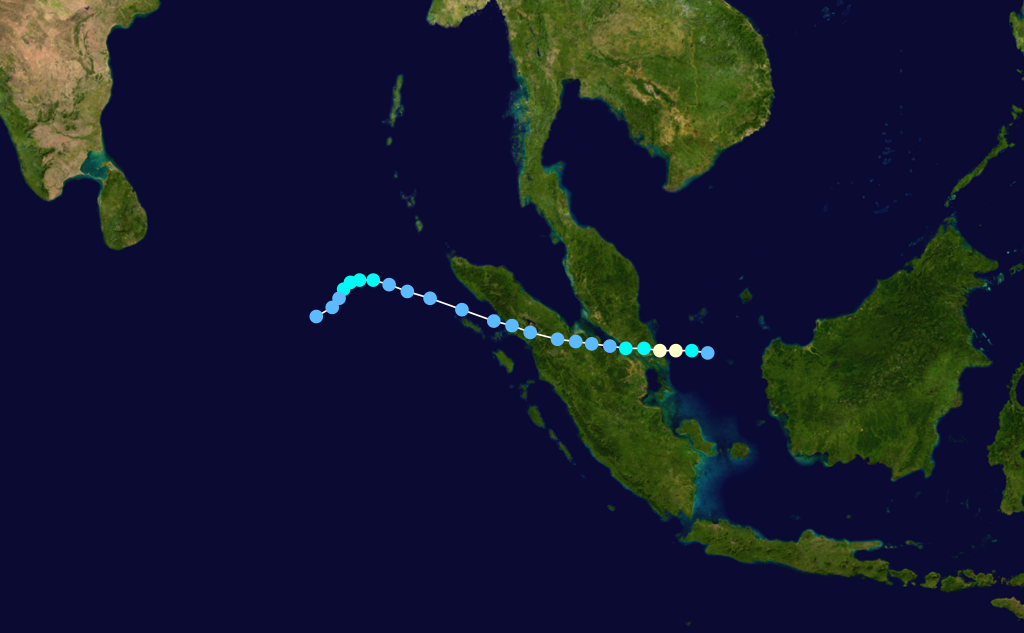 So how could this happen in the absence of any significant Coriolis effect?  Well, it turns out that the Coriolis effect isn’t necessary for tropical cyclone development if other things can impart sufficient spin.  In the case of Typhoon Vamei, a surface high pressure system north of the area carried a surge of cold air on its southeast side down into the South China Sea.  The wind associated with this surge of air increased in speed as it passed through the relatively narrow channel between Borneo and Malaysia. This rapidly moving wind then turned eastward as it was deflected by land and passed over the equator (the flip side of the situation discussed in my post Why it rains in the ITCZ where easterlies from the southern hemisphere become westerlies after passing north of the equator).  In the meantime, an incompletely closed low pressure system that ordinarily exists over mainland Borneo in the winter — a result of an interaction between monsoonal winds and Borneo’s geography — drifted westward into the South China Sea.  With this incompletely closed low now wrapped in rapid winds on two sides (north winds to its west and west winds to its south), it closed and began to spin counterclockwise. Some suggest also that the incorporation of peripheral hot towers (exceptionally high cumulonimbus clouds whose formation near the eye of tropical cyclones frequently presages their intensification) into the center of the storm was necessary for full development.  At any rate, all of this occurred in an area of the South China Sea wide enough to keep land from interfering with Typhoon Vamei’s development.

Interestingly, Martha and Vamei shared a number of characteristics: both were small, both rapidly intensified, and both remained at hurricane/typhoon strength for only a short period of time. A weak and non-significant contribution of the Coriolis effect to the spin of these two tropical cyclones may explain all these similarities.  It’s believed that a weak Coriolis effect allows low-level moisture to closely approach the cores of low latitude tropical cyclones.  This concentrates the heat from rainfall — which contributes to the spin of these storms away from the surface — in the wall of a very small eye and also results in a narrow convectively driven vortex that is very susceptible to destruction by vertical shear.